After a restless night and an alarm that never went off, we woke up late and missed the train we intended to catch to Neuschwanstein. We threw on our warmest clothes (the high for the day was going to be 55), packed cameras and wallets and ran for the metro to the train station. Luckily, this is Europe and a train runs this route every hour.

Unfortunately, in our rush, we tried to buy the proper train ticket on Mike’s phone instead of figuring out German buttons again. This worked ok when we had service in Munich, but when the grumpy train ticket lady came around half way through our journey, we no longer had service and could no longer open our ticket. Luckily, some Germans sitting nearby jumped to our defense and translated the situation, to which she rolled her eyes and walked off.

For two hours the train rolled through beautiful German countryside. Mike and I played a game where we would spot cows and then moo at each other. I noticed roof after roof had solar and some farms even had scattered wind turbines – proof that even in northern, cold Germany solar is somehow reasonable. Later, Mike and I geeked out over Germany’s energy portfolio on Wikipedia.

The train ended in a cute town called Fussen where a small historical downtown on the water held winding, narrow cobblestone streets lined with shops and eateries. Here, we got bikes at the local hostel and met our tour guide (right on time!). 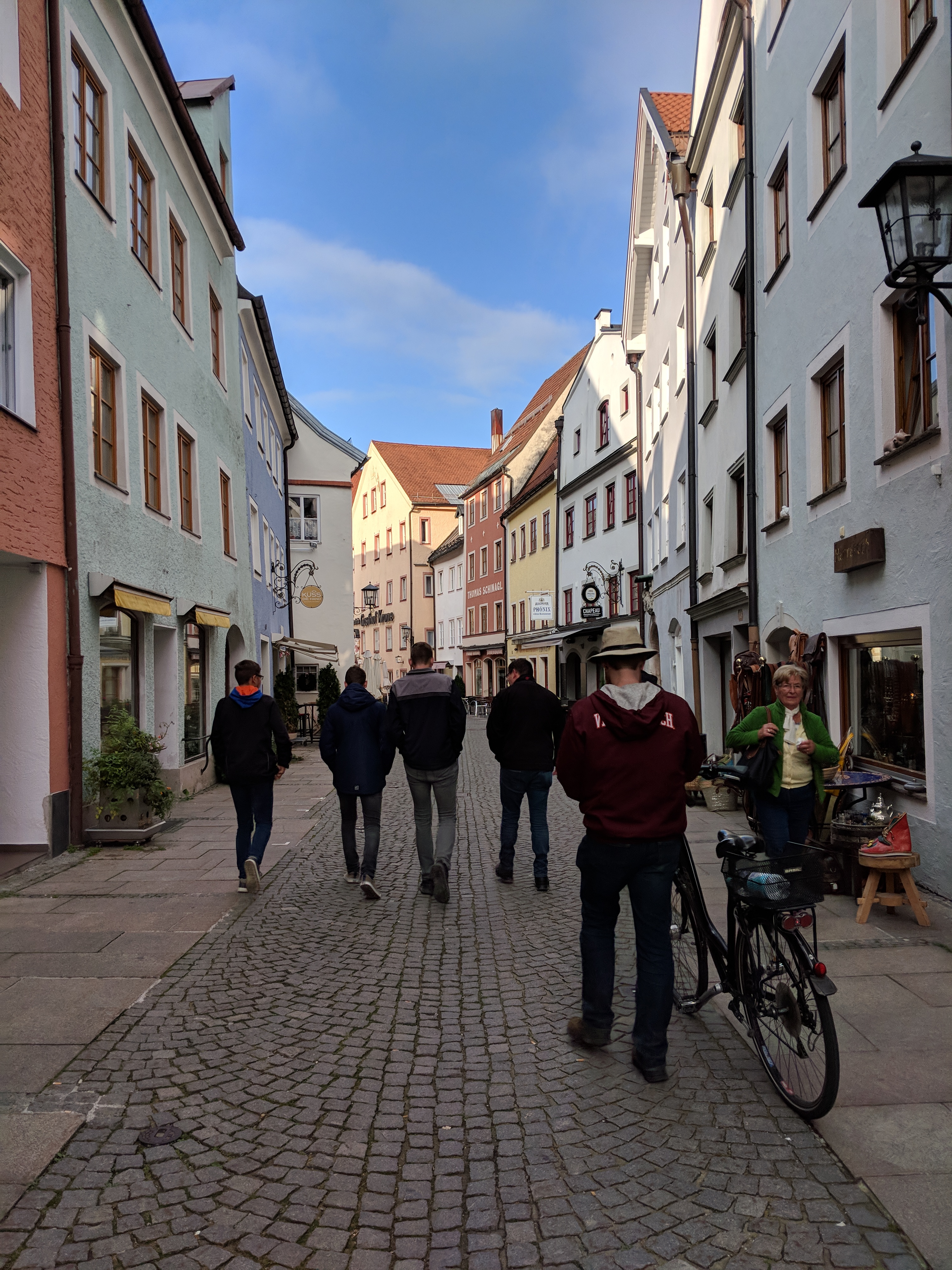 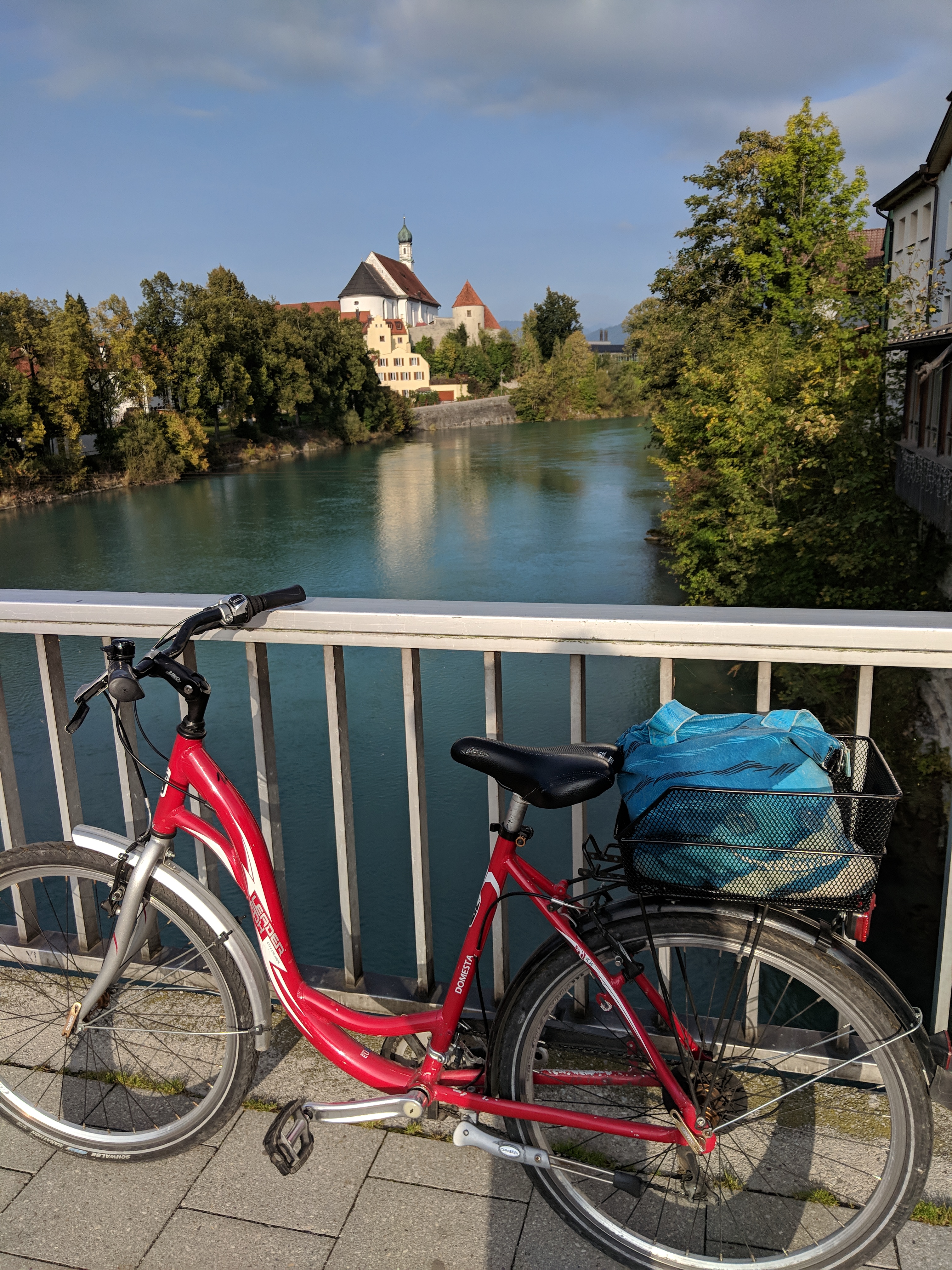 From the outside, Neuschwanstein had seemed a bit complicated to plan: you had to take a train to Fussen then a particular bus to Hohenschwangau (try saying that 5 times…or at all…) where you could then stand in line and hope for a timed ticket into the castle 2-5 hours from then. If we had been early, we could have attempted all of this ourselves. As it was now, the biking tour guide we had previously booked also became our travel agent and arranged last minute and perfectly timed tickets into the castle (albeit at a premium). Given our morning rush, it was totally worth it. The tour guide herself was pretty average (I probably learned more from Rick Steves than her) but the bike ride was amazing – a leisurely, flat, 20-minute ride from the train station to the base of the castle. Instead of rushing or worrying about getting lost, we got to appreciate the local architecture, look across wide fields, and bike over a river. 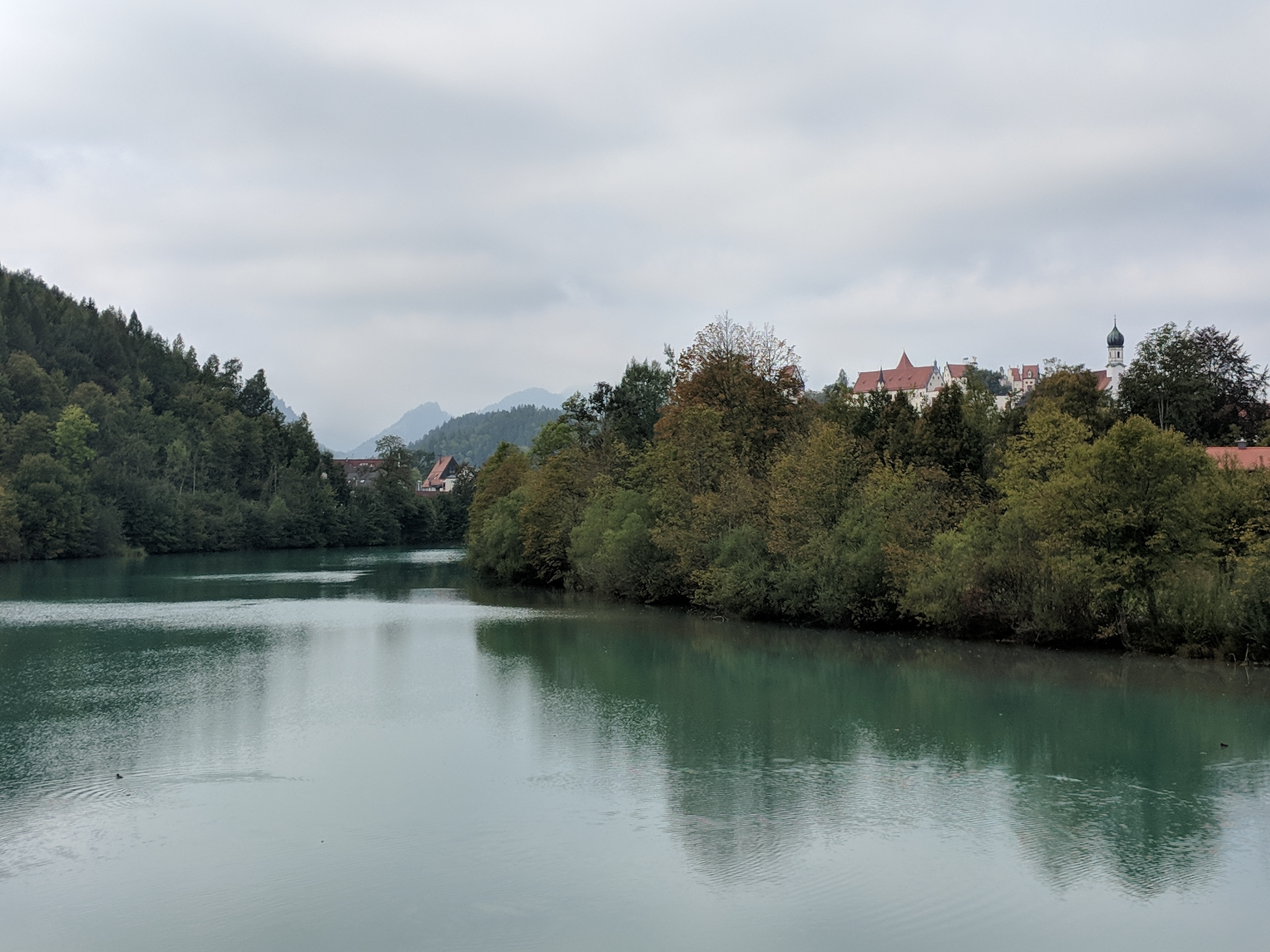 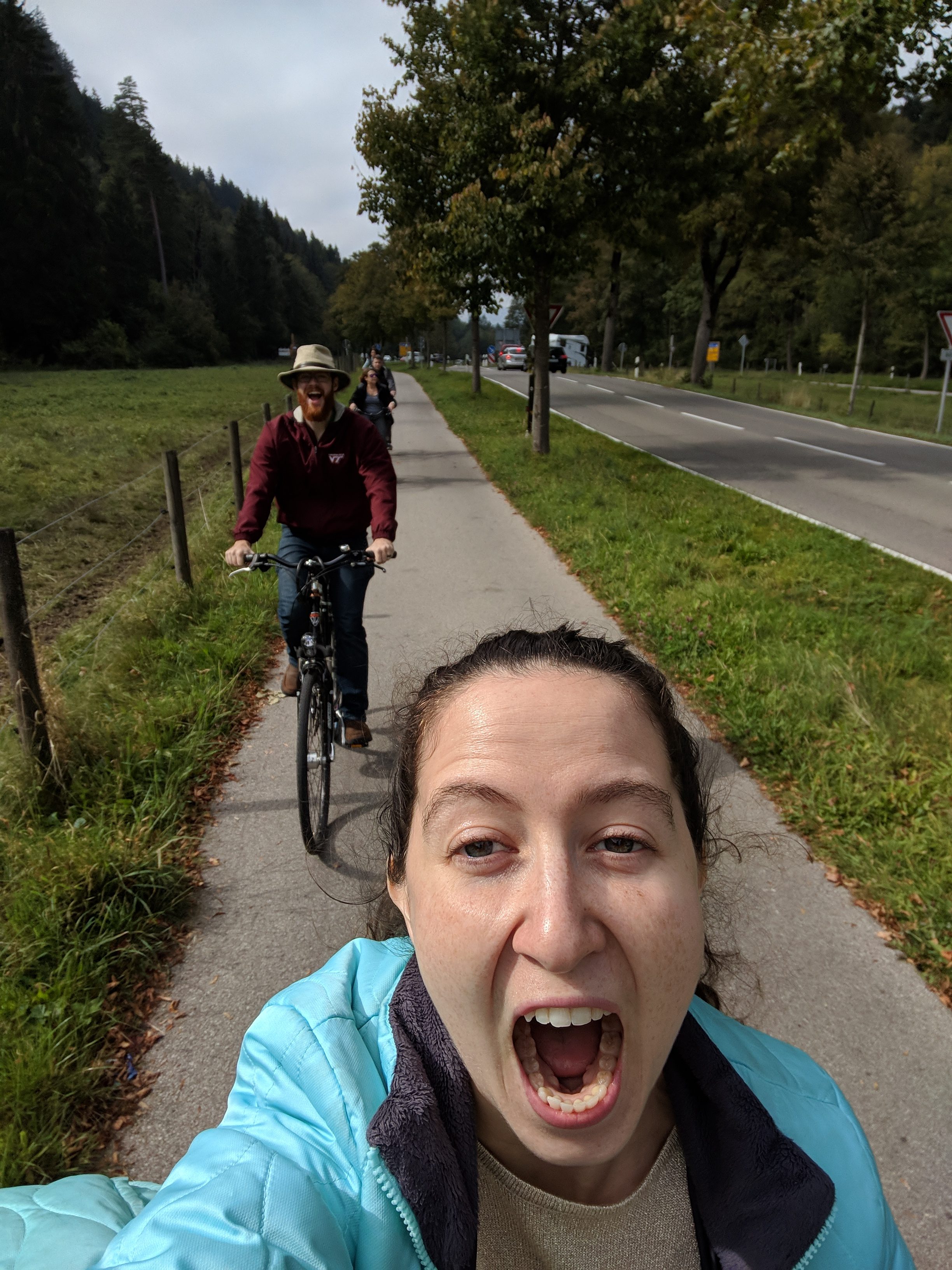 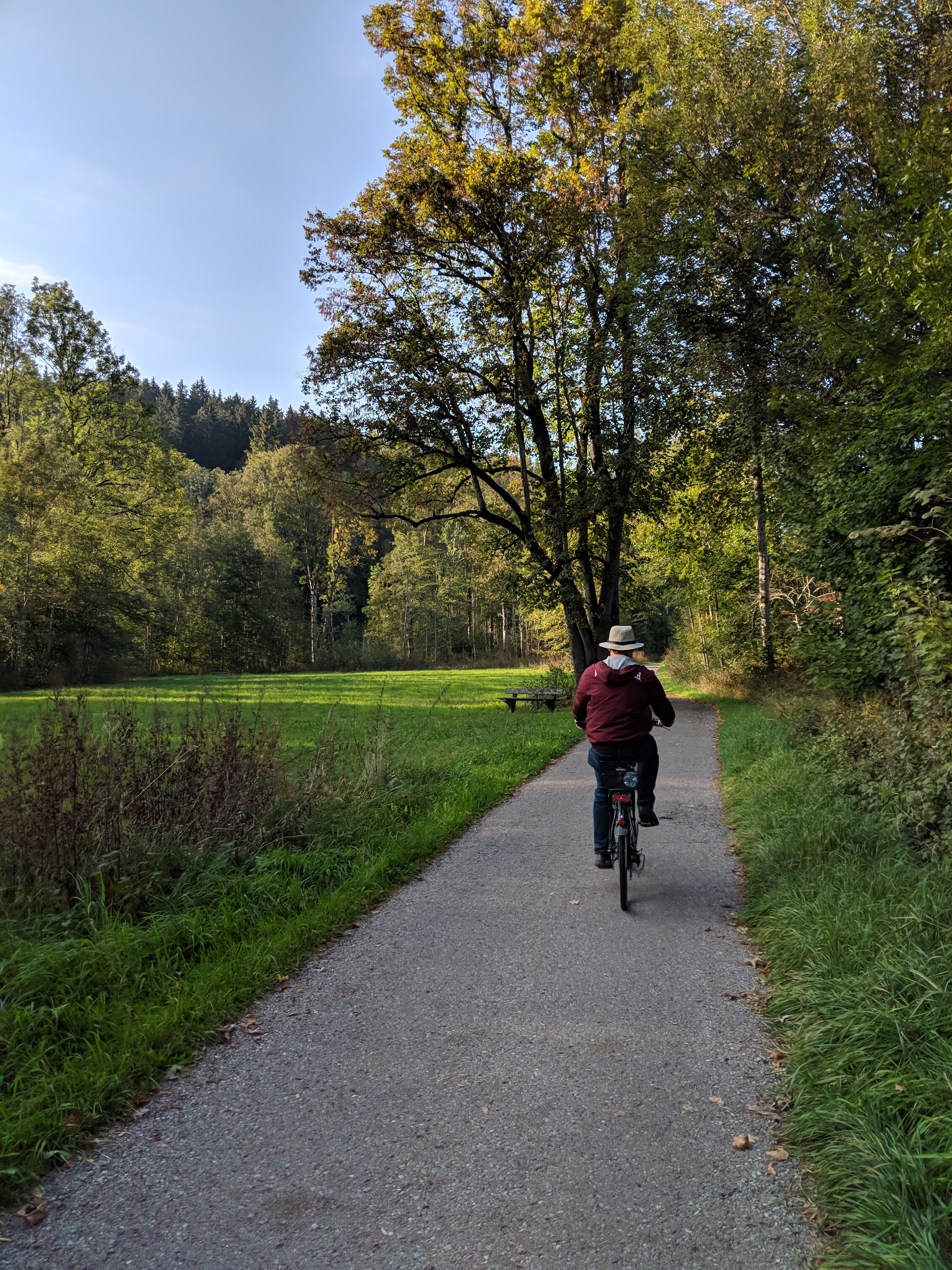 As we biked, the castle peeked from around corners and finally into full view, building anticipation as it appeared larger and larger atop its perch on the mountain. 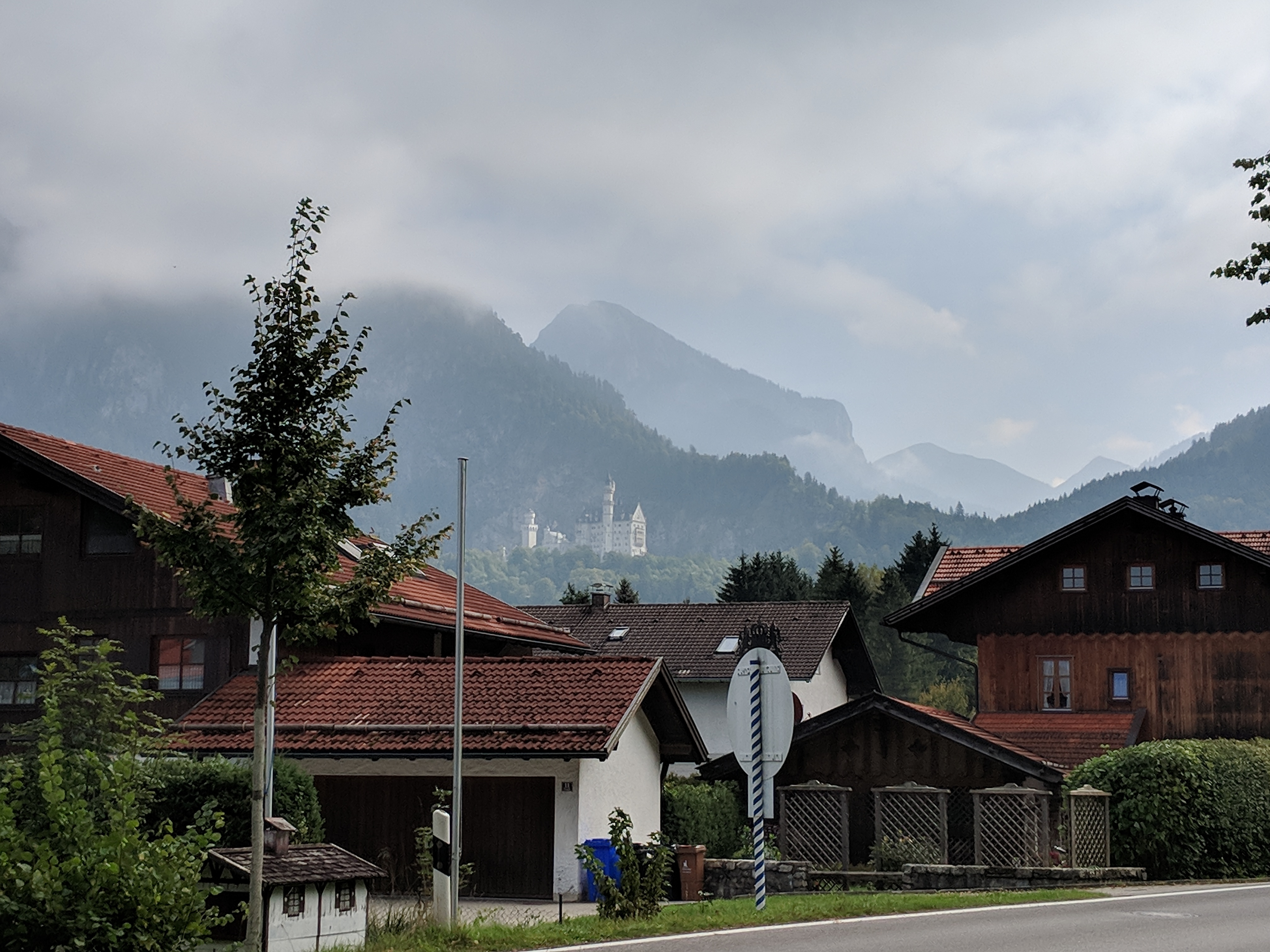 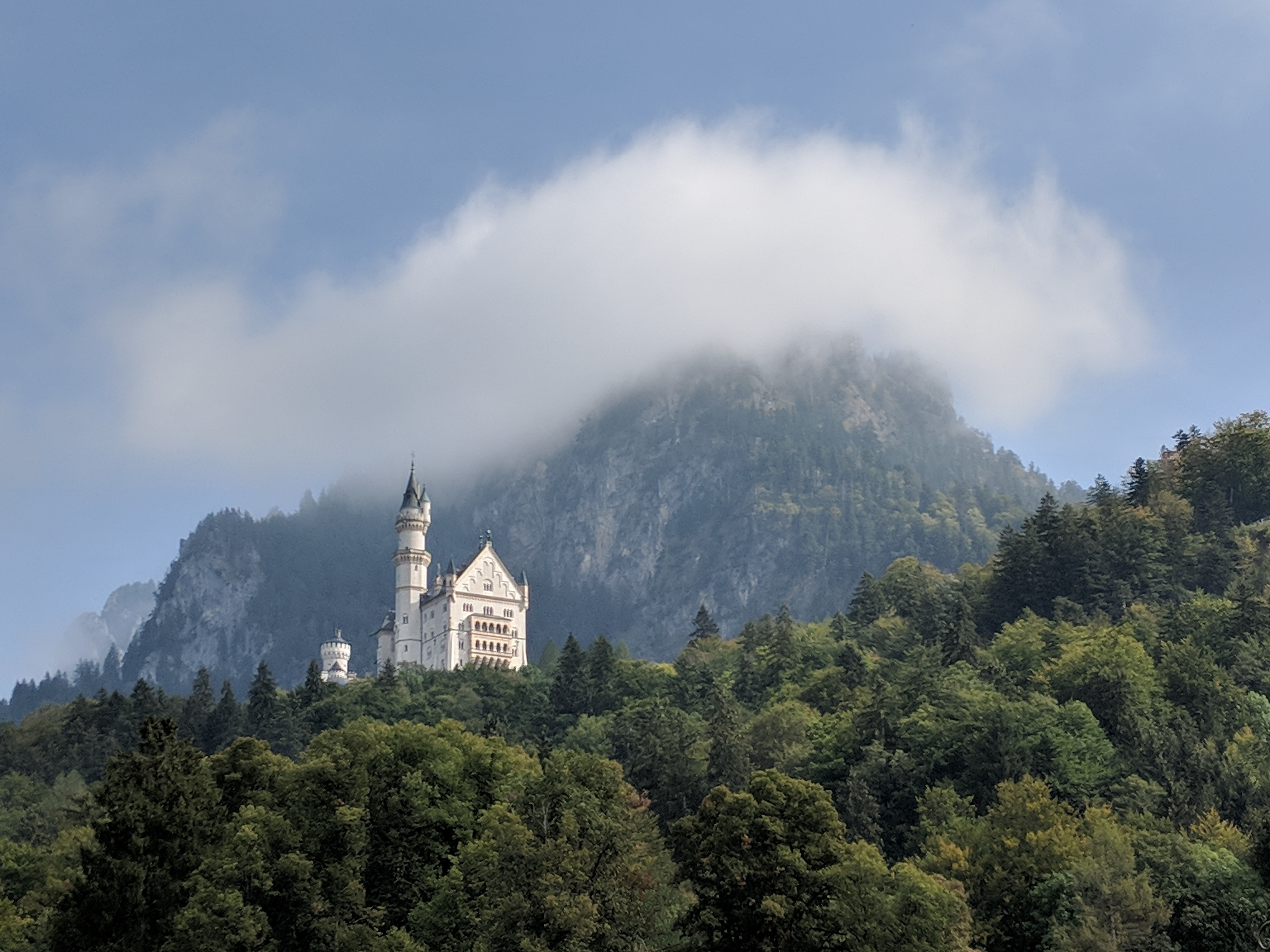 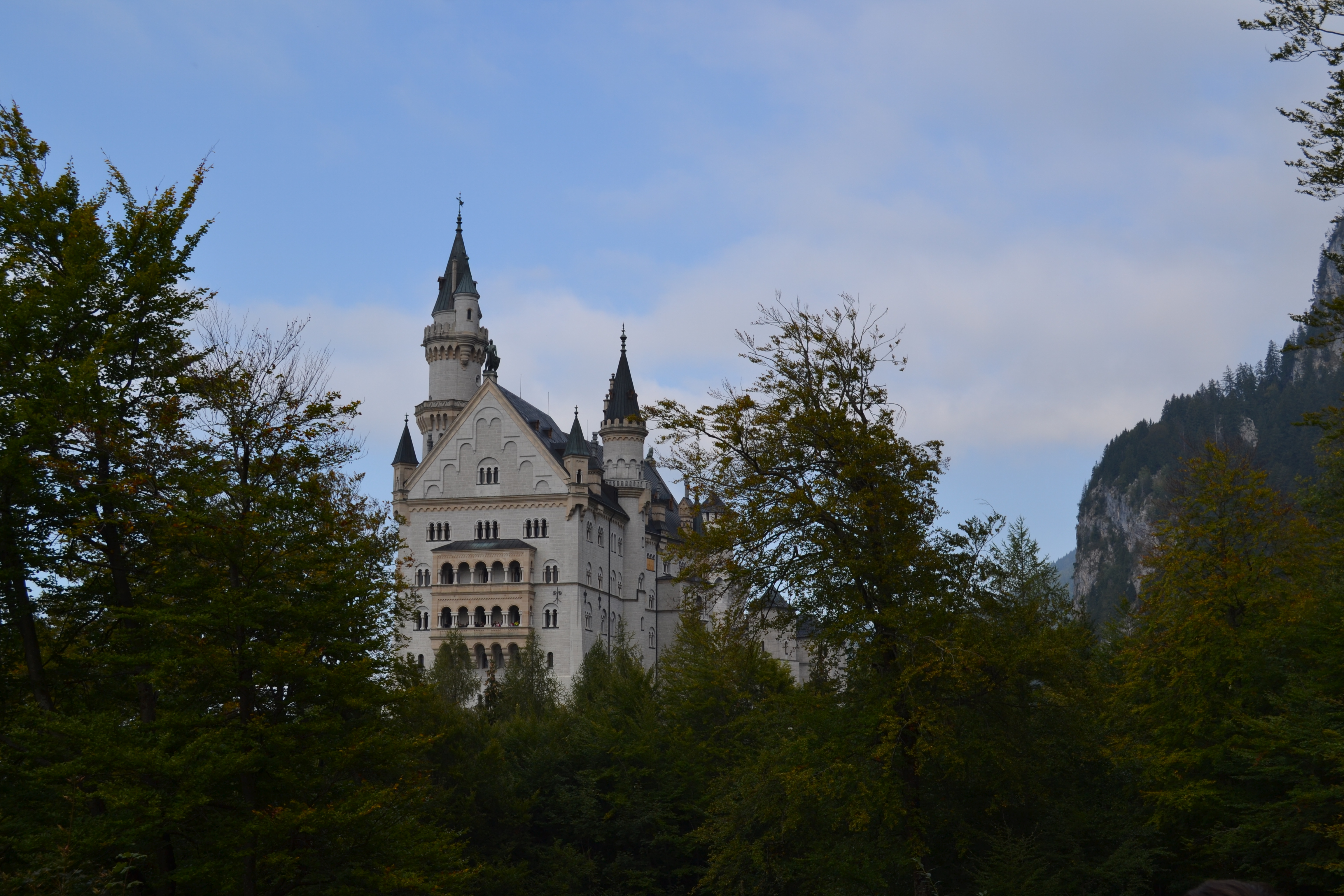 After 17 years of building, “Mad” King Ludwig II of Bavaria had only resided in the castle for 5 months before he was declared insane, dethroned, and imprisoned before dying a mysterious death with his psychiatrist two days later, supposedly an accidental drowning in 1 meter deep water. He was actually in the middle of building three castles and was having money problems – only 1/3 of Neuschwanstein was ever actually completed. Hearing this, I wondered if touring the inside was even worth it – who wants to pay so much money to only see 1/3 of a castle of a guy with money problems when the outside is the GORGEOUS, fairy tale portion you could hike beneath? 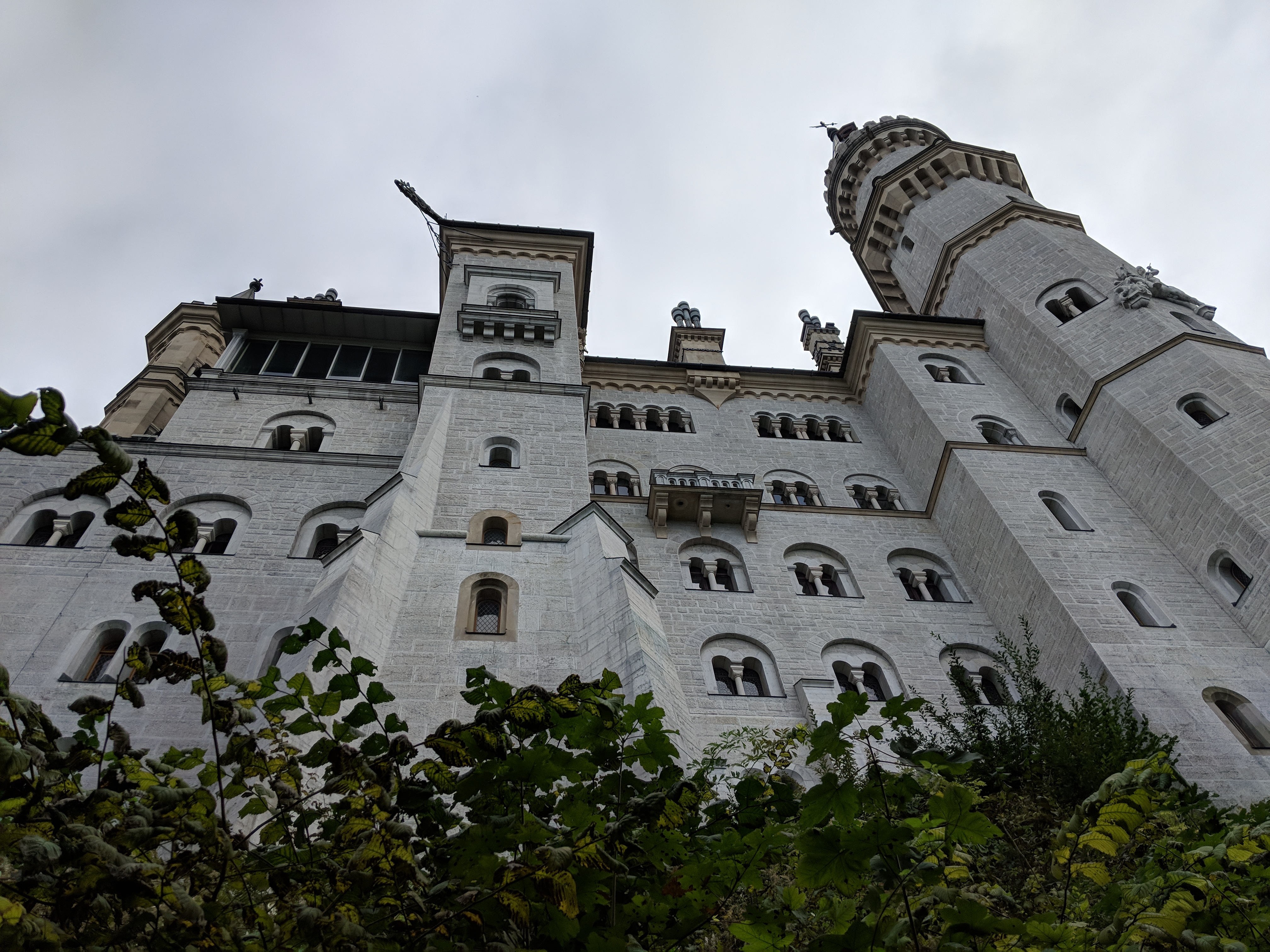 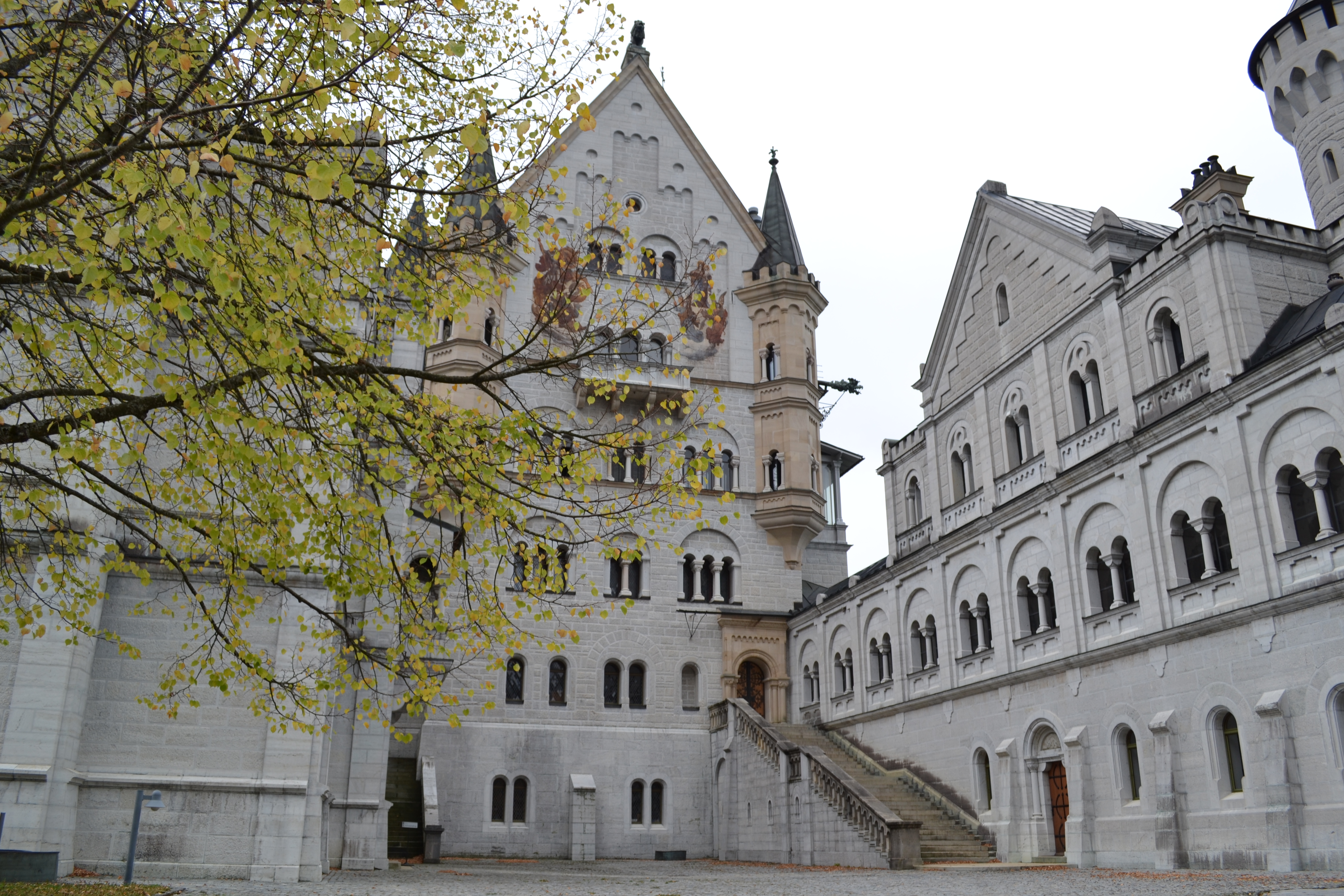 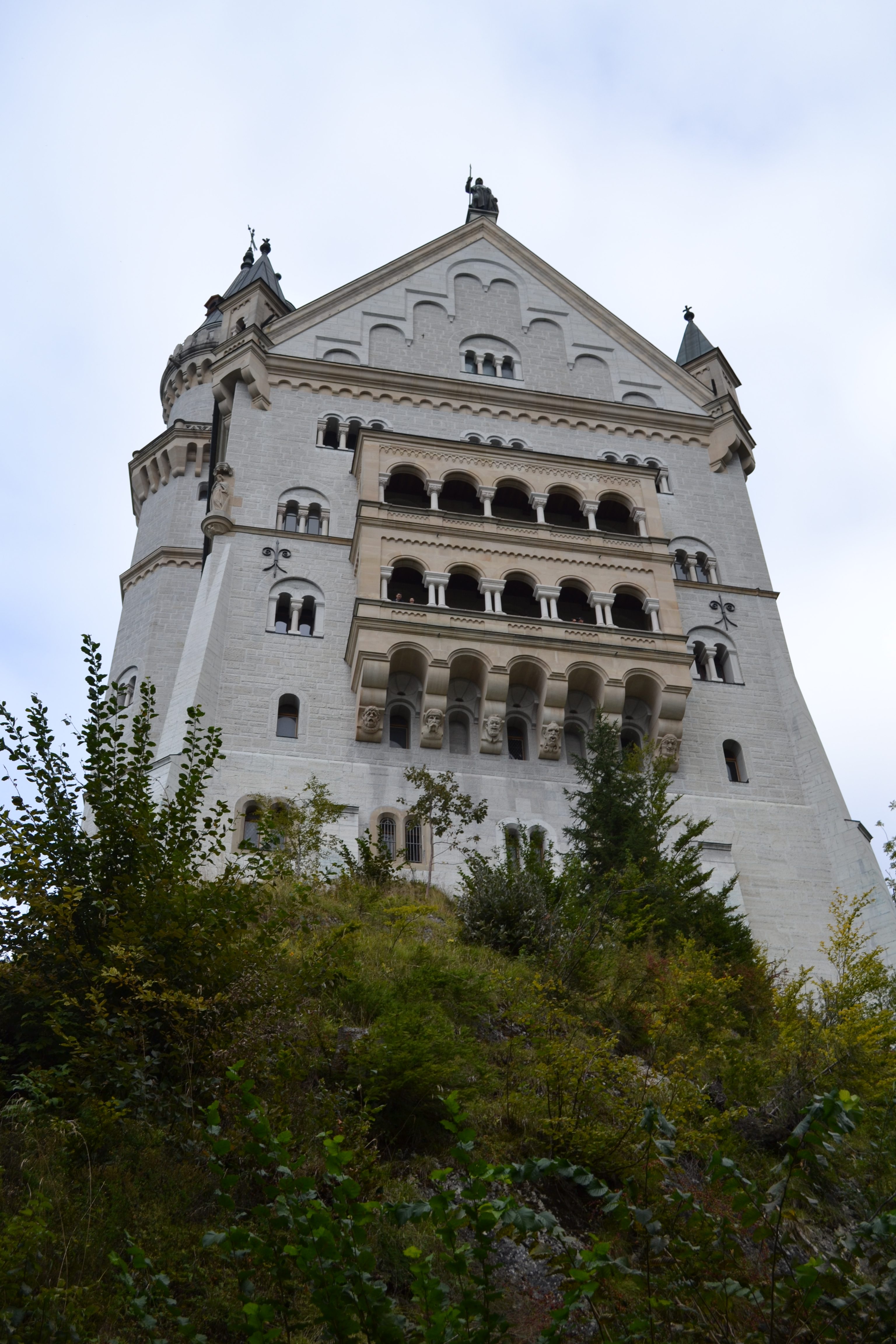 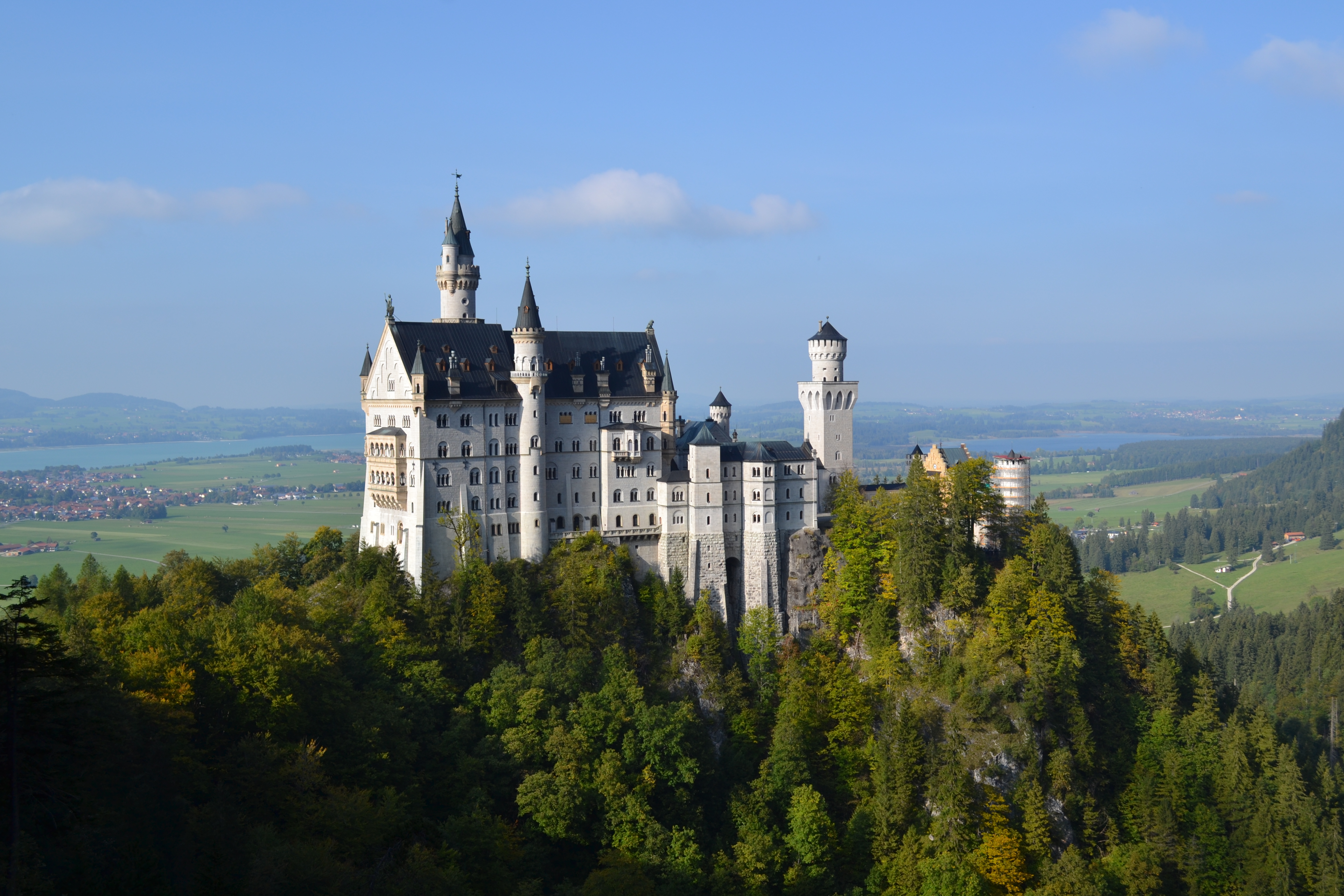 But it was fascinating. King Ludwig was a King in the late 1800’s, a puppet of his larger neighbors Austria and Prussia, on the eve of unification where Bavaria would become part of a larger Germany, and in a Victorian era filled with new technology but also the beginnings of Democracy where the role of Kings had been reduced. And in the midst of this, this wealthy but not powerful man dreamt of the middle ages where Kings could be Kings. A set designer for plays designed the outside of Neuschwanstein before an architect was forced to make Disney’s Cinderella castle a reality. The interior used modern steel to support the structure, modern plumbing, a telephone to the neighboring castle, and battery-powered lighting and servant callers. The modern foundation supported gilded walls of panels of Wagner plots, bed frames and chairs with intricate carvings, and even an entire hallway re-imagined with plaster and lighting to be a cave/grotto. The entire house was designed to be the setting of a medieval play with an actor and audience of one. There were roaring lions, snarling dragons and elegant swans – none of which I had associated with a Bavarian King before.

We weren’t allowed to take pictures inside the castle – but here was King Ludwig II’s view:

Back in Munich, we braved the dark and cold to find Mike a dinner of Schnitzel at a proper biergarden (apparently, one can not survive on pretzels and pastries alone). The inside was surprisingly concrete and modern-looking, but with low-ceiling nooks and crannies for your party to escape into. We sat at the bar, surrounded by revelers in Dirndls and Lederhosen. The bartender was kind and talkative and after the house beer we had him craft us a drink that became a sort-of-mojito with the house made ginger lemonade. 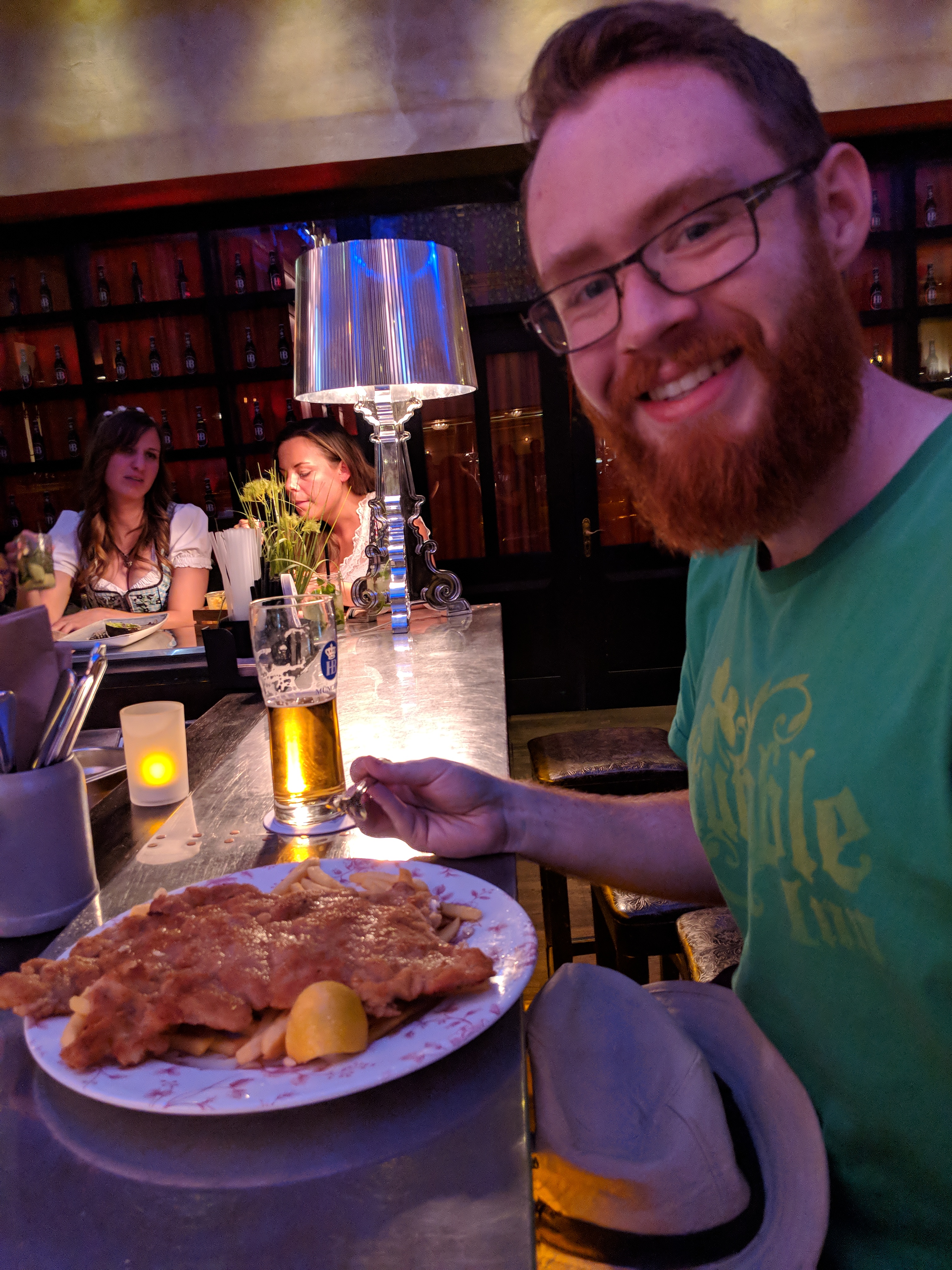