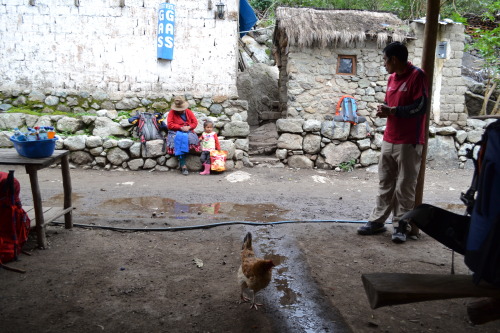 An hour into our first day hiking the Inka Trail, our guides paused for a break underneath a shelter with thin wooden benches along the perimeter. I was now double my normal depth so my pack fit on the bench but my butt didn’t -so for a while I awkwardly leaned, refusing to take my pack off. An older woman sat on a wall with her ankles crossed working on some piece of fabric across the path from us. A stray chicken and a boy ran around the shelter. After an early pick-up and rushing to starting points and check points, it was a moment where we had nothing better to do than take a sip of water, breathe, and look around. The guides did the normal get-to-know everyone thing and 16 strangers began to try and remember each other’s names.

But then our guide Raul, changed direction a bit and asked “What happens when the people who live here get sick?” Bleakly, in my head, I thought “they die?” We are on a trail into the forest. There’s a train several miles away, but that’s probably expensive. There are no roads. There’s the Urubamba river, but that’s miles away and it doesn’t look like a tranquil float. Even if you do find transportation after walking miles, there’s only a small hospital (for tourists, mostly) at the base of Macchu Picchu in Aguas Calientes (at this point, that’s a four day walk away for us) or back in Cusco, a two-hour bus ride away at best. Even if they make it to a hospital, could they afford the bill and prescriptions? If you live out here, you’re probably a farmer eking out a living from the land – where is there money for transportation and care? But Raul takes a different tact that makes my foreboding thoughts feel true but naïve. Plants, he says. The locals make medicines from what’s around them. People don’t take obstacles laying down – they invent and learn and use the resources at their disposal to the best of their abilities.

Which brings us to literal herbal remedies. The Peruvian’s seemed to have a tea for everything. Upset stomach? I’ll make you a special tea. Diarhhea? I’ll make you a special tea. Period cramps? Headache? Sore muscles? Altitude sickness? Special tea. Special tea. Special tea. Special tea. And the favored tea? Coca. As in the leaves that are eventually processed and concentrated into Cocaine. At leaf level, the effects are not as deleterious and instead act as a sort of pain relief. (E.g. Coca Cola used to have real cocaine in it and was first advertised as medicinal.) The porters shove leaves directly between their teeth and cheek, sucking out the juices as they haul pounds of gear. All of us Westerners brought along mini-pharmacies for the hike. To cover our bases, we sampled from both our western pharmacy and local prescriptions. So for sore muscles it was Ibuprofen and special tea; for an upset stomach it was pepto bismal and special tea.

I have a lot of opinions on America’s healthcare system. Like how Mike’s altitude sickness prescription cost $10 with his insurance and mine was $50 and that only marriage or the kindness of my employer can fix that because insurance options (and Congress) suck. The U.S. has some of the most expensive healthcare in the world – maybe a Peruvian hospital stay is affordable; in the U.S., it’s the number one reason people file for bankruptcy. Though, obviously, I am more privileged than most of the world by sheer access to vaccines and medicine. But that’s not what I want to get into right now.

I had researched online that we should get altitude sickness medicine for our trip to Peru – that preemptively taking this drug would help us acclimate and avoid getting sick. What I want to get into is how that altitude sickness prescription made us feel. Diamox is the only drug out there that treats altitude sickness, everything else just attempts to mask the symptoms. Everyone used to sea-level quantities of oxygen feel lightness of breath at higher altitudes – but, for a random few, altitude sickness is like day one of the flu or the worst hangover of your life:  you are puking your brains out, your head is pounding, and even the thought of moving is too exhausting to contemplate. Luckily, Mike and I took our Diamox. However, there were side effects: first a tingly feeling like your hands and feet had fallen asleep and were now on pins and needles and then, for Mike, diarrhea. Which is not the greatest when you only see two (disgusting, brutally smelling) toilets a day and your next best option is a bush. (SN: don’t worry, Mike didn’t suffer alone – I got my period and was in a nearby bush – lol so much TMI right now). Those side effects are still way better than day one of the flu. But our beautiful western medicine that was supposed to cure all ails still came at a price – those pesky side-effects that are only mentioned in the tiny print. I don’t think any tea has been scientifically proven to stop altitude sickness, but it also probably doesn’t have side effects. Maybe masking symptoms is enough of a middle ground to get you through.

I have no idea if the Coca leaves or Ibuprofen got me through four days of hiking (probably the Ibuprofen). And I have no idea if Quechua tea, herbal pills bought off of Amazon (ran into a lovely Mormon Utahan couple who did this – but seriously, yall, who knows what’s in those?!?! They’re not regulated by the FDA!), or a prescription of Diamox ultimately solved people’s altitude sickness or other ailments (it’s probably the Diamox). There are ways to overuse and abuse western medicine – we could have taken less of it after a day or two at altitude to try and minimize the side effects had we known what they were.

And how bad is coca tea really? Could there actually be no medical benefit to it? If acetominophin can cause liver damage, are Coca leaves really that dangerous? Is this more of a social science thing of what substance could be more easily abused? – like actetominophin doesn’t eventually become cocaine…

Ok…I got sidetracked… what I mean is beyond the hype, I would like scientific progress and the search for truth to win. I would like pain relief and comfort to win. We still have a lot to learn from tea (and local remedies in general) though – I’d just like to observe their effects with repeatable, double-blind studies.