At the markets in Peru (and around the world), you are supposed to haggle for whatever you want to buy. There are no stickers to mark an item’s price and when you ask, the answer probably depends on your skin color and how gullible you look. 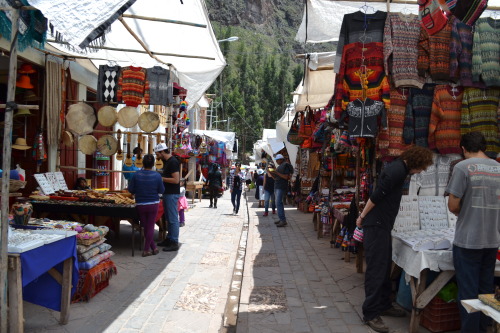 With the right attitude, haggling that price down can be fun. It’s a battle of wits and stalling and forced compromises. It forces a traveler to speak and interact with a local who is not there to please them – not a hotel concierge or flight attendant or a travel guide – a real person who must be kind to tourists but is not directly in the tourism industry. Buying souvenirs becomes a living, breathing transaction instead of through a screen and a credit card. In Peru, the language barrier added another translation element to the sales where Peruvian Soles are converted to American Dollars and bids are tossed around in Spanish, English, or the Arabic numerals displayed on a four-function calculator. (My Spanish lasted for the numbers 1-10 and then sort of 11-20 and then very quickly died – the vendors, brilliantly, have realized they can sell more when they tell you the price/haggle in English – I call it “transactional” fluency even if there is zero “conversational” fluency.)

But it gets old. And I start over-analyzing. Because the price of something depends so much on your looks and nationality, it feels like you’re being taken advantage of. And I don’t want to be swindled! And how am I supposed to know what a good deal even sounds like? When negotiating the price of everything got tiresome in Pisac I just paid the woman what she wanted – like I am over putting time and effort into haggling over a pair of socks. But then for pricier items I went to the other extreme of feeling like I haggled too hard core. At one point this woman looked like she was about to cry because at the last second I tried to drop the price by 10 more Soles – and if it was a fake almost-cry to try and get me to buy the tapestry already, it was damn convincing desperation, as she tried to close the deal while corralling her toddler son as he peed into the gutter behind us. 10 Soles is the equivalent of about $3 US. I was haggling over three more dollars. Which begs the question of who is really the one being taken advantage of? Sure, vendors push us to pay more than the locals. And as a former starving-college-student-now-living-in-a-basement typical millennial, I’m keen on keeping to a budget. But even the over-priced goods here are still so much less expensive than in the U.S. Here, I am giving money directly to the person who will benefit from it, not Walmart. And in a couple of days I will return to one of the wealthiest countries on earth where clean water is plentiful and free (well, not in Flint…but you get my point) and where $3 doesn’t amount to much – and I have no idea where she’s returning to. Shouldn’t there be two prices then? One for the locals and one for us, the wealthy tourists flitting in and out of their country? On a moral level, sure. On an individual, person-to-person transaction level, it still feels dubious and confusing.