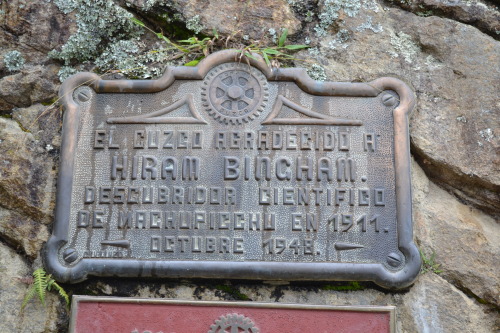 Hiram Bingham III was a pretty crappy Yale professor who used his wife’s fortune to seek glory as an explorer. It was the early 20th century – when the West was exporting enlightenment via colonialization and before the Great War ripped apart it’s social order and idealism. Africa was being divided and conquered, the Panama Canal was under construction, ex-president Theodore Roosevelt was living the ‘strenuous life’ and canoeing uncharted rivers in the Amazon, and National Geographic stunned readers as the last corners of the earth were discovered. But it’s that word – discover – which is so heavy and contentious nowadays.

On the one hand there’s this narrative of Bingham as a daring researcher and explorer. Bingham was originally looking for the last city of the Inca where, after the Spanish took advantage of an Incan civil war and usurped power, the last blood relative of the Incan King hid out in the jungle and waged guerrilla warfare on Cusco and the Spanish for decades. Bingham poured through Cusco archives, hired indigenous guides to lead him through dense forest for weeks, and bribed anyone he met along the way for Incan artifacts and information. And he found what he was looking for: two cities, including one currently believed to be the last city, and dozens of other Inca-era sites; finally, on a hint from a boy, Bingham made a side-trip and discovered Machu Picchu (the Machu Picchu tour guides declare the boy the first tour guide and therefore their patron saint). National Geographic devoted an entire issue to the journey, featuring the first of what is now one of the most easily recognized views in the world: Huyanu Picchu spiked up toward the clouds with a city full of ruins and llamas below. Except in Bingham’s picture, the ruins had yet to be excavated and dense greenery made it almost unrecognizable to my eyes – like nothing much was there at all. Bingham returned for two more journeys in 1915 and 1916, this time taking the now famous pilgrimage route, the Inca Trail. The same trail the Incan God-King would have been carried from Cusco to his Machu Picchu retreat and the same trail (with some updates) that Mike and I set out to tackle.

I kept pushing our two guides for their opinion of Bingham. One of our guides, Marco, shrugged and put Bingham’s impact into a modern context. Decades ago, the indigenous language Quechua – one of the five languages that was part of the vast Incan empire – was beginning to die out. As people from the forest and valley moved to the big city where the Spanish language ruled, they stuck out like a sore thumb and were stigmatized as being poor, uneducated, and backwards. Their heritage was something to be ashamed of. Until tourism. Until the rest of the world saw value in their language and heritage and poured money into the region just to get a glimpse of it. Without Bingham, how would the word have gotten out? How would Machu Picchu have been restored and protected? Or declared a New Wonder of the World? Bingham led to celebrity which led to money which led to restoration of artifacts and preservation of a way of life. Now Marco, all of our porters, and all of the people of the sacred valley can speak Quechua proudly. And, unlike most other indigenous languages (3 of the 5 Incan empire languages are dead), Quechua looks like it will not die out any time soon: the next generation is taught in Quechua at school.

Our other guide, Raul, had much less praise for Bingham – I might even call it contempt. Within the first few minutes of arriving at Machu Picchu he asked: “where’s the gold?” Cusco – especially anywhere the God-King touched – was covered in gold. If this was the Inca’s Camp David and the Spanish never found this place – then where is it all? Raul’s conclusion: Bingham stole it. But let’s back up here: the real accusation here is that Bingham took artifacts from his dig site and brought them back to Yale. And now, within the past decade, Peru has asked for them back and Yale was like “nah”.  And Peru was like “I’ll see you in court.” And Yale was like “back then everyone stole artifacts, it’s fine!”. And Peru gave them side-eye and they went to couples counseling and now the artifacts have been returned to a small museum in Cusco. (A better breakdown of what happened can be read here though none of the artifacts contain gold).

So if we drop the discoverer term we can see Bingham as an explorer and the best tourism advertiser Peru has ever seen. And maybe his actions at the time helped preserve artifacts that could have been lost. But he was also in it for himself, not the locals – keeping in good graces with Yale, selling books, becoming famous – so maybe he did ferry artifacts out of the country without the government’s permission. What’s perhaps worse than whatever Bingham did is Yale refusing to stand by the contracts Bingham had signed for so long. An entire country should not have to sue a university to retrieve their heritage (don’t even get me started on the British Museum…).

To me, its not that Bingham doesn’t warrant a place in the Machu Picchu story, but he shouldn’t be the entire story, the only famous name associated with the site. Why not focus on the great Incan God-King Pachacutec, who is credited with doubling the empire’s size? Why not focus on a Peruvian anthropologist? If we don’t like the idea of first-world white males holding such power over indigenous sites, then lets change the conversation.