On the back of an old McDonald’s receipt, Cath, an American getting her Master’s at Nottingham, had scribbled down precise instructions on how to get to Chatsworth: 40 minute train to Matlock, then 40 minutes on the number 34 bus to Chatsworth. It seemed straight forward enough, though I never would have figured it out on my own. So Saturday evening, with nothing spectacular planned for the following Sunday, Missie and I bought our train tickets and dreamed of lounging in the grass and reading like a true Bennett sister.

Because, of course, Chatsworth is Mr Darcy’s home, Pemberley, in the 2005 adaptation of Pride and Prejudice with Keira Knightley. That night, we watched the movie in preparation (much to Ryan’s chagrin as he had just watched it with his girlfriend and did not want to be dragged into another girly movie so we also played cards to entertain him).

Our road to Chatsworth was not as emotionally tolling as Lizzie’s but our transportation ended up not going as smoothly as the back of the receipt had made it seem. The bus from campus to the train station never came so we took a cab with a driver that couldn’t seem to find one of the main landmarks of the city. The train was pleasant enough but when we went to catch the bus, we learned we had gone to the wrong bus station – in the small town of Matlock, the end point of this train line, there were TWO freakin bus stations. And on a Sunday, the bus we wanted came only once an hour. During our wait, we stopped and had some breakfast tea. The small store was one of the few open on a Sunday morning and a gaggle of men were on their last sip but not their last word when we snuck in to take our seats in the corner. Later, the sounds of the radio emanated from the kitchen playing 80’s hits like Shaggy’s “Red-handed” and MC Hammer’s “Ice-ice baby”. Missie and I just giggled – our calm morning and breakfast tea now juxtaposed with a reggae voice lamenting being caught banging some chick on the bathroom floor (I mean, how could he forget he had given her an extra key?). But we did make it. The double decker bus wound slowly through the Peak District, past farms and small houses, down two lane roads that somehow turn into one lane when everyone is home and their car is parked out front, and waited patiently behind bicyclists on their touring circuit. Missie made the brilliant observation that gardens here are chaotically beautiful – yards don’t appear manicured and flowers aren’t planted in neat rows; instead, it’s as if this beautiful boque of wildflowers magically sprung up in exactly the right place. Past fields of sheep, we descended from the crest of a hill into the valley that held shining Chatsworth below.

It was…huge. Even the movie doesn’t give the size of this place justice. We got lost for an hour just trying to find the entrance. I wish I was kidding or exaggerating – I want that hour back. At the entrance, a woman gave a short introduction to the house, filled with one liners like: “In the house, if you think you see something from ancient Egypt or Rome, it is. If you think you see a Rembrandt, it is.” The Cavendish’s who owned the house had wealth in land, artifacts, and political power. While lots of people have had wealth and land through the ages, continuously picking the winning side in civil wars and political upheavals allowed the family to keep their land and wealth and maintain their collections within their family. And they continue to live in it to this day. (I know right?) Which means, ancient artwork and architecture have been preserved and passed down, but also modern elements are continuously added. Like the wire sculptures sprinkled throughout the gardens: Or the bright pink boxes many of the sculptures posed on (“Wounded Achilles” is front and center): Each room was so dense with wondrous things, I struggled to take it all in. Missie would read from information cards scattered in the back of a room and fill me in on little details. Or the pair of tall white things by the fireplace are Narwhal horns: Or that during World War II, a girl’s boarding school took refuge in these walls. (Two of them are still alive today and were at the opening of this particular exhibit. A quote on the wall of a letter home to the parents stated they had been bombed earlier in the day, but that everyone was fine and the girls would still be going to bed on time. #what): Or that the portrait to the far right is of Tsar Nicholas of Russia from when he visited: This dining room table was SHORTENED to better accommodate tourists: This is King Henry the VIII. You have probably seen this portrait in your European history textbook: This is the oldest sculpture in the portrait gallery Missie and I could find. It’s from Ancient Greece (~300 BC). These were the only depictions of black people in the whole house – they were also the only statues I wanted to know the story of and couldn’t find it – the pair were so regal and beautiful: And, of course, the veiled vestal virgin: In the library, I asked one of the docents what his favorite book was. He answered King Henry VIII’s daughter’s bible and pointed to a back corner. Apparently I can make an appointment and see any of the books I wish.

On an architecture note, the base of the house has remained relatively the same since it was made. Entire sections were added on to the back end. A bachelor-partier added walls to form a courtyard more suitable for big events (all I could picture was that scene from Leo’s Gatsby and my internal DJ began playing ‘a little party never killed nobody’). The area is rich in mineral wealth and almost every material that went into the house was extracted nearby, like the green stone in the archway to the left apparently came form a quarry over the hill: After a quick lunch, Missie and I toured the gardens. Dozens of families were picnicking and small children played tag like this was their backyard. The roses were in full bloom. The height and length of each stair within a waterfall staircase was altered to emit a unique pitch – creating an echoing natural melody within the pagoda at the top. Missie stopped to read a sign of rules posted nearby and immediately concluded that nowhere did it say we couldn’t go into the water. We soon became barefoot trend setters for several nearby kids. Lastly, we navigated through a hedge maze, itself cleverly hidden amongst the gardens. 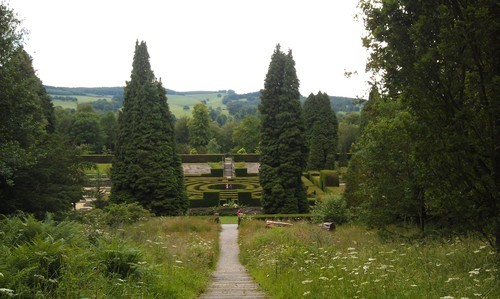 We had gotten none of the high-society leisure time we had envisioned and instead probably accumulated miles of walking and an overall sensory overload. We collapsed ungracefully on the bus and train ride back. I’m pretty sure I drooled. Oh Mr. Darcy, where are you to save our families’ reputations? 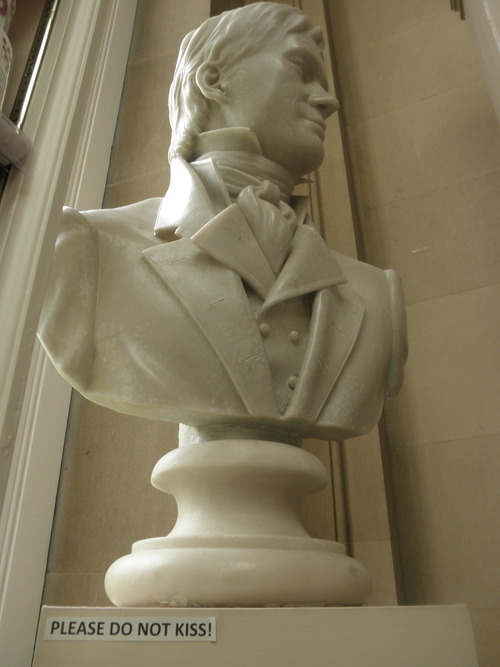 In a random moment of relaxation while at Chatsworth, Missie and I had an interesting discussion on how to appreciate beauty. How do you both live in the moment and properly reflect on those moments? Too often in the house, men (yes, men) with those large expensive cameras would take up an entire room with their angling and maneuvering. If you were a professional photographer of the place, you probably would have gotten access to an empty house after hours. Since you’re not, be a humble tourist like the rest of us. This moment of learning history and gazing at all of these beautiful objects is not yours alone, so please share in the experience with us. I think too often having those big cameras gives you more credentials than you deserve. Not that they’re all bad. A younger girl would crouch in corners, angling and waiting for the right shot while her mother stood nearby holding her coat. They were out of the way and she seemed so focused in her element, almost hiding behind her lens. I personally love photography – I have the memory of Dory and catching the right angle can instantly bring the experience I had back. It also focuses me. Instead of looking at something and walking on, I spend time with it, looking at the object and place in a new light. But when getting just the right picture consumes you, looking at a screen becomes your new reality instead of the real live thing in front of you. Missie hardly took any pictures and preferred to read the note cards in the back of each room – her experience was much more about looking at all the things around her and appreciating the quirky facts she found, which she happily relayed to me. When you’re overwhelmed by the beauty around you, there’s no one right way to take it in; but instead of focusing on how you will tell the story in your blog later, or worried about getting wifi so you can instagram-brag the moment to the world, bearing the morning’s woes of wasting time, or taking up an entire room so your camera can get the best picture – take a breath, look with your actual eyes around you, and smile. And walk up the staircase.