It was the 8th inning of the 7th game of the 2016 World Series. Sprawled on the couch watching, I was also scrolling through Airbnb places in Cusco. One place had caught my eye – it was 10 minutes walking from all the tourist sites, had hundreds of positive reviews, and pictured this sunlit cabana overlooking a sweeping view of the city. But at $100/night, it was a splurge and not the cheap deal I should have been looking for. I decided to go to bed and sleep on it.

But then the Cleveland Indians scored three runs to tie the game. Did I just jinx the Cubs by trying to go to bed?!

So of course, I had to see the Cubs through now. I asked the baseball gods forgiveness for my errors and vowed to stay awake through extra innings and rain delays. In my bargaining phase of the nail-biting game, I pledged that if the Cubs won, I would go for the fancy AirBnb.

So, two months later here we are. The Cubs broke their 108-year curse and had a really cute SNL skit. And Mike and I have this view of Cusco as we watch the Emperor’s New Groove. 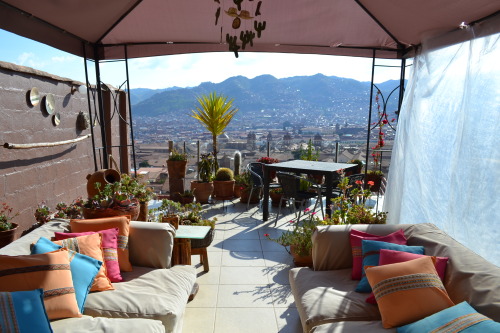 The AirBnb is actually brilliant. I was afraid at first when we were emailed very specific directions:

From the airport, I would suggest that you take a cab that is dropping someone at the airport; it will cost you three times less (between 10 to 15 soles or 6 us) than if you take one of the taxis at the exit of the terminal. Tell the taxi driver to go to the neighborhood (barrio) San Blas on the street corners of TANDAPATA and SIETE ANGELITOS (not San Cristobal district, it would be a detour to charge you more). Once arriving at the Plaza San Blas, continue straight ahead on the street Carmen Alto. On the first street (Siete Angelitos), turn right. Go up to the end of the street, to the corner of TANDAPATA and SIETE ANGELITOS where you will see a flight of stairs. Climb the stairs (the 44 steps). At the top there is a branch in Y, turn right and go up the other 10 steps, you will be on KISKAPATA. You are just steps from the house; we live at number 1000, fourth house on your right from the beginning of the street. (The house numbers are not sequential; they range from 335, 505, 999 and finally 1000).

Umm…what?…I need to say all that in Spanish (hey remember that time in Costa Rica I was super proud of myself for knowing what verde meant so I could catch the green bus?)…did he say 44 steps?…and why aren’t the numbers sequential?!

And yet…the directions were accurate and proved helpful. The older parts where we stayed (and where most tourists are) are ancient (pre-car and maybe pre llama-and-carriage?) and on a hill – so most streets are pedestrian only or barely wide enough for a car plus many ‘streets’ are really just staircases. Mike and I hauled our out-of-shape butts and packs up those 44 stairs (and attributed our breathlessness to the lack of oxygen, definitely not our physical fitness) and met a cheerful Denis.

Denis gave us restaurant suggestions and a map, made us a sprawling breakfast the next morning, found us a cab for an all-day personal tour of the sacred valley, and held our stuff while we were on the Inka Trail even though we weren’t coming back to stay another night. Thanks for the win, Cubs.